Hope you are eating well. I’ll come back soon 🙂

Fritella (or Fritedda) is a Sicilian springtime braised vegetable dish or vegetable stew cooked with fresh green fava beans, peas, and artichoke hearts, and can be used as pasta sauce. I encountered this dish for the first time while in Caccamo to see U Signuruzzu a Cavaddu.

Caccamo is at the foot of Mount Eurako or San Calogero, and rises on a hill 520 meters above sea level. It was late March but still chilly and very windy up in the mountains. Hearing wind roaring in an empty flat, which I rented over the weekend, I felt myself pretty isolated in the small town with about 9,000 inhabitants.

However, the pasta con fritella I had at a restaurant in town made me somewhat relax, and I felt as if Caccamo had welcomed me warmly. This rather simple dish was a kind of  mum’s or good old home cooking, and I liked very much.

I experimented with the pasta several times at home and settled on the recipe below. Just used fennel bulb without any fronds as I wanted to enjoy green peas in season. Tried fresh artichoke hearts but it didn’t work well unfortunately – maybe because they were imported and not so fresh although kept refrigerated. More likely, I didn’t clean and prepare them properly?? Cos I had never cooked before!! Well anyway, smoked hearts in olive oil from a deli worked perfectly, so I used them for my recipe. Much easier than preparing fresh ones, isn’t it? 😀

Another good thing is that this is one-pot cooking! 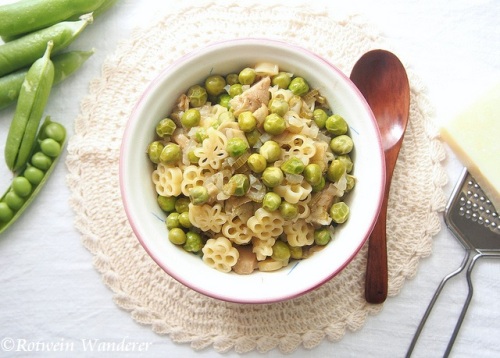 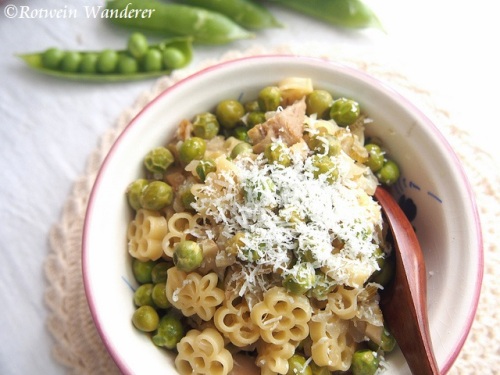 On Palm Sunday, Caccamo hosts U Signuruzzu a Cavaddu: a ceremony of eastern origin that recalls Jesus’ entry to Jerusalem; a parade through the main churches with an altar boy, a donkey, elegantly decked and embellished, blesses the bystanders. The altar is the smallest of the aspirated ‘russuliddi’, in clerical garb and accessories completely red. Both Jesus and the 12 apostles are played by boys holding long branches of palm trees, along the way, are intertwined, forming the arches under which passes the birthday boy. (http://www.fhshh.com) 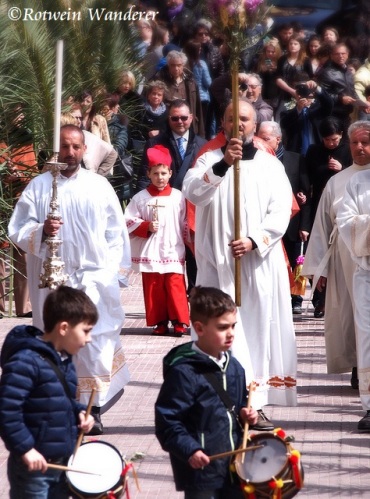 Castello di Caccamo (Caccamo Castle) built in the 12th Century is among the largest and best preserved Norman castles in Sicily, and one of the largest in Italy. The castle is located on a steep cliff and overlooks the surrounding countryside, including the San Leonardo River Valley and the Rosmarina artificial lake.

If you are lucky (?), you might bump into ghosts in the castle!! 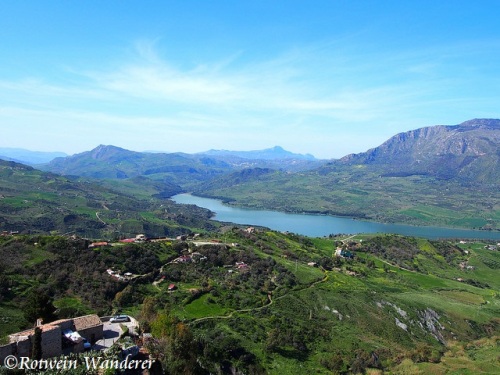 I saw another procession later that day. That was neither religious nor traditional one. The Comune di Caccamo just opened a museum of the castle, which is the first monument in Caccamo, so the town hold a ribbon cutting opening ceremony and a ‘Medieval’ procession. How lucky I was to witness two processions in a day!

Must Eat in Caccamo

If you visit Caccamo, you cannot miss A Castellana, where I enjoyed fritella. Their pizzas looked good as well, but I highly recommend Fiocchetti ripieni di Speck e Provola con Stracciatella di Burrata, which is  a kind of ravioli pasta, stuffed with speck and Provola cheese, with Stracciatella di Burrata cheese sauce. The photo below isn’t nice, but it was fantastic!!

How to get to Caccamo

Direct bus services are available from Palermo or Termini Imerese.
For the timetable, check with Autolinee Randazzo. 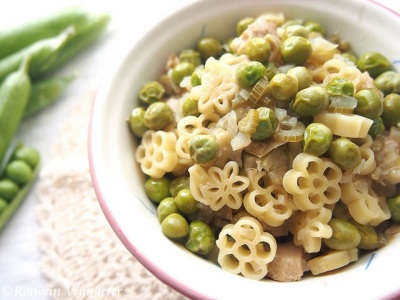 I have been playing with fennel for the last one month as I’m really into the vegetable lately (read my posts: Macco and Bucatini con Sarde). This is like I did with beetroot last year, so Ronit’s Lamb and Fennel Stew recipe was added to the top of my to-do list as soon as it appeared on the Worldpress Reader. I gave it a try yesterday, which turned out to be satisfaction – no, more than that!

This was absolutely fantastic!! The sauce tasted really beautiful even before oven braising!! (I realised why Ronit recommends orange blossom honey when adding it.) I couldn’t hardly wait for two hours! Well, it was worthwhile waiting though!!  Of course, lamb and fennel bulb were tasty as well!

I basically followed her recipe, but substituted some ingredients that I couldn’t find:

Thank you so much for sharing this recipe, Ronit. I will probably try this again before I drink up the bottle of Arak 😀 and another stew, Lamb Stew with Tomatoes, Okra and Dried Apricots, while Okra is in season but before it gets really hot in the summer.

This quick and easy to prepare stew is the perfect dish for this season, when spring somehow refuses to fully arrive, yet the heavier winter’s stews are not as happily accepted. Fennel is a wonderf… 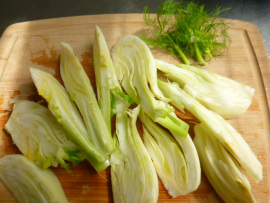 To be honest, I don’t care for sardines much. I’m a fan of blueback fish such as mackerel, horse mackerel and Pacific saury, but not sardine. I like anchovy and oiled sardines though – ah, neither herrings but like kippered! Weird, isn’t it? A restaurant in Palermo, however, changed my preference towards the fish (a bit 😀 ).

Sardines are so plentiful in Sicily, and you couldn’t fully enjoy the local food without sardines there. Among them, Pasta con le Sarde, one of the most famous Sicilian dishes, cannot be missed. I know, I know… yet I was still a bit reluctant to try the pasta when I visited Sicily for the first time….

It turned out, however, BINGO!  Maybe because fennel makes the strong fishy taste less and helps the dish mellow along with other ingredients. I LOVE (now at last 😀 ) the unique but harmonious combination of the ingredients: not only the fish and the herb/vegetable but also sweet raisins, crunchy pine nuts and pungent saffron – and maybe salty anchovy as well. I think that’s why I like Pasta con Broccoli, too!

Unfortunately, wild fennel is not available here, so I replaced it with fronds of Florence fennel (cultivated fennel) and added some fennel seeds into the water to cook pasta instead of boiling the fronds in it so that it could enhance fennel flavour in the dish.

Pasta con le Sarde (Pasta chî Sardi in Sicilian) is a specialty of Palermo, and bucatini is traditionally used for this dish as well as Pasta con il Broccoli.  The pasta can be found anywhere in Sicily, but  there are many regional variations: with tomato (in rosso), without tomato and saffron only (in bianco), with roasted almonds, baked (al forno) etc….

Also, Pasta con le Sarde can be eaten all though the year, however, it is especially eaten well around St Joseph’s Day along with Macco. The saint day usually falls during Lent. That is the reason this meatless pasta with mollica, toasted breadcrumbs (cf. Bucatini con Broccoli) which symbolise sawdust (Joseph was thought to be  a carpenter), is  served. 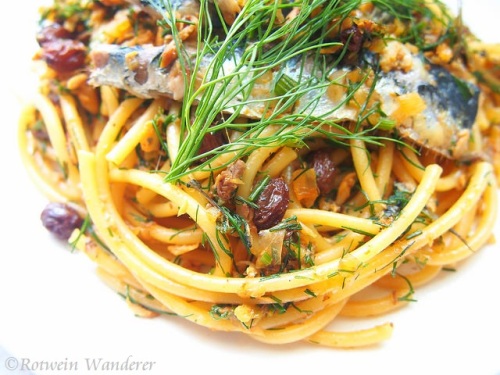 If you have a bottle of arak (just wondering if pastis works as well…?) at home, try with the pasta! I happened to have an Israeli one, and enjoyed it very much – the anise flavoured spirits (with some water) cleansed the fishy taste but still fennel flavour (well, anise flavour actually) remained in my mouth, which was really refreshing and comfortable!

MUST EAT in PALERMO

La Cambusa is one of my favourite restaurants in Palermo. I go back to the restaurant for the pasta whenever in Palermo. They serve wonderful fish dishes such as of sward fish etc.

Macco, served during winter or up to beginning of spring, and Moscato Passito, dessert wine made from Sicilian native Zibibbo grape, are also nice!

Palermo is recognised as the European Capital of Street Food, and it’s in the fifth place in the ‘top ten cities for street food’ ranking published by Virtual Tourist.com. Enjoy the famous traditional delicacies!

And for a sweet tooth:

I ran into finocchio, or Florence fennel at a  nearby supermarket the other day. ‘Wow, this is really something quite unexpected…. How on earth can I miss this???’ I had never seen the fresh ‘vegetable’ in this country, but I had been hoping to cook with finocchio or finocchietto since I had Macco for the first time in Sicily this March.

Macco (also known as macco di fave), or Maccu, is a traditional Sicilian thick soup or a soup dish cooked with dried fava beans and wild fennel as primary ingredients. The name of this dish derives from the Latin word, macero which means ‘to soften or tenderise’. Macco is strongly linked with St Joseph’s Day and eaten well around the saint feast day.

In Sicily, where St. Joseph is regarded by many as their Patron saint, thanks are given to St. Joseph for preventing a famine in Sicily during the Middle Ages. According to legend, there was a severe drought at the time, and the people prayed for their patron saint to bring them rain. They promised that if he answered their prayers, they would prepare a large feast to honour him. The rain did come, and the people of Sicily prepared a large banquet for their patron saint. The fava bean was the crop which saved the population from starvation and is a traditional part of St. Joseph’s Day altars and traditions. Giving food to the needy is a St. Joseph’s Day custom. Maccu di San Giuseppe is a traditional Sicilian dish that consists of various ingredients and maccu is prepared on this day.    — Wikipedia

Many activities are scheduled for the feast, including the one called la tavola di San Giuseppe, the St Joseph’s Table. The Table manifestation takes many forms, depending on towns or villages. Upon St. Joseph’s Day altar, people place flowers, limes, candles, wine, fava beans, specially prepared cakes, breads, and cookies as well as other meatless dishes.

The central element on the feast of San Giuseppe is bread.  Speaking of bread, I missed the Easter Arches or Bread Arches in San Biagio Platani near Agrigento.

Unfortunately, I couldn’t reach Borgetto to see la Tavola di San Giuseppe due to limited public transportation on Saturday. Instead, I witnessed another interesting custom in Caccamo, a small town up in the mountains where I visited for U Signuruzzu a Cavaddu on Palm Sunday.

Not sure what those are for as I didn’t have a chance to ask the locals about the custom. It’s not on the altar but a kind of la Tavola di San Giuseppe, I guess. 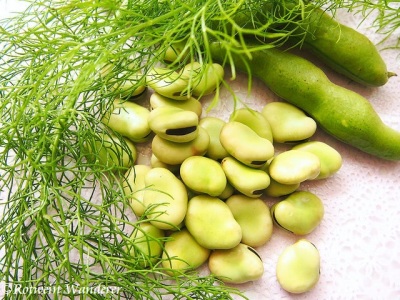 Sorry for the long introduction. Anyway, I was so fascinated by the soup, very simple dish though, that I was thinking about making this soup. Dried fava beans are used for this dish, but I cooked with fresh ones now in season here. And used finocchio bulb, the fronds and fennel seeds because finocchietto/finocchietto selvatico, i.e. wild fennel is unobtainable. 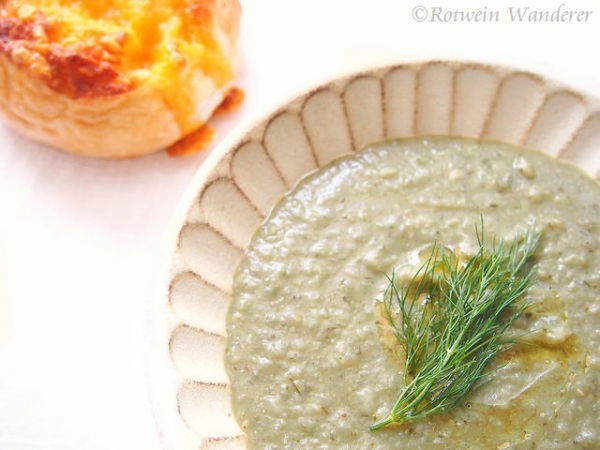 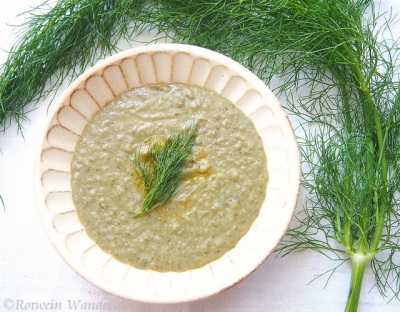 I made it really thick – thicker than the one I had in Palermo – so that it can be used in a pasta dish as well. Browsing on the web, I noticed ‘pasta con Macco’ exists.

Christmas Markets in Germany and Riga 2017

© Rotwein Wanderer and the Door into Promised Lands blog, 2015 – 2019. Unauthorized use and/or duplication of this material without express and written permission from this blog’s author and/or owner is strictly prohibited.